Is Joint Replacement Surgery the Best Option for Arthritis? 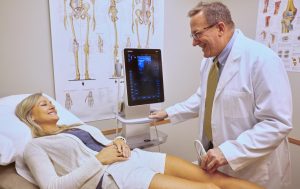 I have been treating painful and arthritic joints with stem cell therapy for over 7 years now.  I have more experience doing stem cell treatments than just about anyone else in the southeast, and that includes the big teaching hospitals like Duke and Chapel Hill. (Surprisingly, even the big academic medical centers are not using stem cells for routine arthritis treatment.  That is mainly because teaching hospitals have orthopedic surgical residents that need surgical training.)   I have treated thousands of patients and thousands of joints…lumbar spines, shoulders, hips, knees, thumbs, elbows, fingers, ankles, toes, wrists, and more.  I have treated all kinds of patients from teens to folks in their nineties!  I have treated all stages of arthritis, from the mildest cases with normal x-rays to Stage 4 cases that are bone on bone.  Interestingly, I see a LOT of patients that come in for a second opinion because an orthopedist told them that their arthritis was ‘bone on bone’ and that their only option was a joint replacement.  In a significant percentage of those patients, their x-rays are not only not ‘bone on bone’ they are not even CLOSE to being severe enough to warrant joint replacement surgery.  But let’s face facts.  If the only tool in your toolbox is a hammer, everything starts to look like a nail.  Also, most insurance companies gladly pay for joint replacement surgeries.  And most patients are eager to LET them, rather than pay out of pocket for any other treatment, no matter how good it is.

There are several reasons for the rush to surgery to fix a painful joint.  First, patients view surgery as a ‘permanent’ treatment for arthritis.   They think that once the joint is replaced, they are ‘cured’ and will never have any more pain or problems with that joint.  Secondly, most insurance companies including Medicare will cover most of the costs for joint replacement, so patients view this as a ‘no cost to me’ option, which on the surface seems very attractive.  Why pay for treatment when you can get it for free???

Third, patients are impatient.  They want results RIGHT NOW.  They think that surgery is quick and simple and that they’ll be up and around on their bionic knee or hip in short order.  They don’t want to wait around for something else to work while they’re in pain and not able to do the things they want to do.

Beginning in February 2022, Exactech, a major manufacturer of artificial joints,  issued a series of product recalls that impacted more than 270,000 knee, hip, and ankle replacements.  Leaks occurred in the vacuum packaging bags that could allow air to get in and degrade the artificial prostheses prior to their use.  If this occurred, oxidation could cause accelerated wear debris, bone loss, and component fatigue and fracture, all leading to revision surgery that was more complicated and painful than the original implant surgery.  There are now multiple claims involving patients who received these implants and suffered implant failure.  Having to remove and replace a faulty, worn-out, broken, or infected implant is more difficult than the original replacement surgery due to the formation of scar tissue around the joint and prior drilling and cutting of the bones that make them weaker.  After several failures, the surgeon could theoretically reach a point where doing another joint replacement would be technically impossible.  Then you are left with a completely nonfunctional joint, which is a disaster.  It would seem intuitive, therefore, that one would want to ‘save’ your natural joints as long as possible before resorting to artificial ones.

The risks of surgery are not insignificant.  In 2019 in Spartanburg, SC, an 18-year-old high school football star died during routine ACL repair surgery.  In December 2021, a Roswell, GA high school football star who was 18 years old, 6’4” tall, 215 lbs, with a 3.9 GPA died after routine shoulder surgery.  And these were two young, healthy boys with no chronic medical problems.  Is your surgical risk higher or lower than theirs?  While millions of joint replacement surgeries are done every year in America, people do die from surgical complications either during or after what was considered ‘routine surgery.’  Most people getting joint replacements are much older and have more medical problems than these 2 boys did, yet their outcome was catastrophic.  It’s just a fact.  People can die after surgery.  Experts estimate that 35 out of every 10,000 patients die within 30 days of hip replacement surgery.  That rate rises to 1% (1 out of every 100 patients) within 90 days of surgery.  That is, in the first 90 days after a major orthopedic surgery, 1 out of every 100 patients will die from complications like blood clots, infections, heart attacks, etc.   Would you willingly undergo a procedure, ANY procedure, if you knew that there was a 1% chance you would be dead in 3 months?  People over 70 years of age are at higher risk for sudden death after surgery.

Surgical complications occur in about 1 out of every 20 cases.  Death may be 1 in 100 but major complications are 1 in TWENTY.  That’s 5%.  That is COMMON, not rare.   Some of the complications include blood clots, also known as DVT which can be fatal if they break loose and travel to the heart or lungs.  Infections occur in up to 2% of patients within 90 days and can involve the artificial joint itself or any other part of the body.  It’s a well-known fact that infections acquired in a hospital (so-called nosocomial infections) are usually from bacteria that are resistant to a lot of commonly used antibiotics.   An artificial joint that becomes infected must be REMOVED immediately and powerful, intravenous antibiotics must be given.  Rarely, a life-threatening condition called sepsis occurs where the infection overpowers the body and causes severe illness and death.  Another possible complication of surgery is nerve damage which can lead to numbness, weakness, burning pains, or a drop foot, a condition where you cannot pick up your toes, causing you to drag your foot when trying to walk.  Damage to arteries and veins can occur that can lead to bleeding or serious problems with the circulation that may require a second surgery to fix.

As stated above, an artificial joint is still only as good as the technology and materials that made it, and they aren’t perfect either.  Medicare data shows that almost 4% of artificial joints must be redone within 18 months.  ‘Re-done’ means a second surgery where the malfunctioning implant is removed and another one is re-inserted.  This wearing out of implants continues over time, affecting 6% of people after 5 years and 12% after 10 years.  The more you weigh and the more active you are, the higher the stress on your artificial joints and the faster they will wear out.  Forget jogging on an artificial knee or playing tennis with an artificial shoulder.

Let’s talk about the costs of surgery.  Even though the insurance pays for the bulk of the costs, there may still be some out-of-pocket costs as even great insurance plans have deductibles that must be met.  There are hospital bills, anesthesiologist bills, radiologist bills, pharmacy bills, physical therapy, and rehab facility bills.  It’s rare that anyone comes through a major surgery without paying ANYTHING.  And if you don’t have insurance, the costs can range from 50 to 100 thousand dollars or more for a simple joint replacement.  This would bankrupt most folks.  A stem cell treatment is a tiny fraction of that.

How to decide which treatment is right for you

Here are some important concepts to remember when seeking care for an arthritic joint. Joint replacement surgery is often recommended prematurely by orthopedists when it’s quite possible that the patient could get years of happy and productive use from their arthritic joint with the proper treatment.  Don’t rely on one person’s ‘bone on bone’ assessment.  They may have an expensive hammer they need to use on your nail.  Secondly, joint replacement surgery is not a permanent cure.  Artificial joints themselves have problems including persistent pain.  Many of our patients come to us having had one joint replaced and are hoping not to go through that experience a second time.  Third, there are always costs associated with any treatment.  Be sure to measure costs not only in financial terms but also in terms of how an artificial joint will impact your future activity and health risks.

At NeoGenix Stem Cells, you will be examined, diagnosed, and treated by Me. I am one of the most experienced regenerative medicine doctors in the Carolinas, having performed thousands of regenerative medicine procedures since January 2016. Our team offers treatments that give substantial, long-lasting relief from joint pain and allow patients to stay clear of surgery with minimal downtime.

Dr. James Altizer has been performing stem cell therapy treatments in North Carolina since January of 2016. Dr. Altizer received expert training from recognized leaders in the regenerative medicine field, including training on bone marrow aspiration with Duke University-affiliated physicians. He has performed thousands of stem cell and growth factor procedures, more than any other medical doctor in the Carolinas.